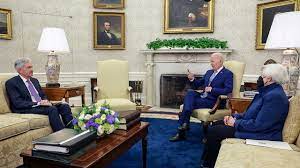 Treasury Secretary Janet Yellen said Wednesday that tariff reductions
on Chinese goods may be warranted as the White House tries to cool the
hottest inflation in four decades, but said that such cuts are not a
“panacea” to runaway consumers prices.

While testifying before the House Ways and Means Committee, Yellen
said the Biden administration is looking to reconfigure some of the
Section 301 tariffs on Chinese goods imposed by former President
Donald Trump in order to be “more strategic” to trade abuses by
Beijing.

“I think some reductions may be warranted and could help to bring down
the prices of things that people buy that are burdensome,” Yellen
said. “I want to make clear, that I honestly don’t think tariff policy
is a panacea with respect to inflation.”

She noted that goods account for just one-third of consumption in the
country and said there is little evidence that tariff reductions could
directly benefit consumers. Still, she said that some of the existing
tariffs have hurt American consumers and businesses.

Commerce Secretary Gina Raimondo confirmed on Sunday that President
Biden is considering lifting some tariffs on Chinese goods as he seeks
to contain voter outrage over the hottest inflation in four decades
and convince Americans that his administration is maximizing efforts
to tame prices.

“We are looking at it. In fact, the president has asked us on his team
to analyze that. And so we are in the process of doing that for him
and he will have to make that decision,” Raimondo said Sunday during
an interview on CNN.

Yellen was grilled over inflation during her two-day appearance on
Capitol Hill, in which she said the U.S. faces “unacceptable” levels
of inflation as a result of the COVID-19 pandemic and the Russian war
in Ukraine.

“We currently face macroeconomic challenges, including unacceptable
levels of inflation as well as the headwinds associated with the
disruptions caused by the pandemic’s effect on supply chains, and the
effects of supply-side disturbances to oil and food markets resulting
from Russia’s war in Ukraine,” Yellen said in prepared remarks.

Yellen said that elements of Biden’s proposed spending legislation –
including reform to the prescription drug market and clean energy
initiatives – could help reduce costs for many American families.

But she offered few solutions to cool the hottest inflation in nearly
four decades beyond that and noted any actions from the White House or
Congress would merely act as an accompaniment to steps taken by the
Federal Reserve.

“To dampen inflationary pressures without undermining the strength of
the labor market an appropriate budgetary stance is needed to
complement monetary policy actions by the Federal Reserve,” she said.
“Moving forward, elements of the president’s proposed legislation –
including the clean energy initiatives and plans to reform the
prescription drug market – can help lower the costs paid by American
consumers.”