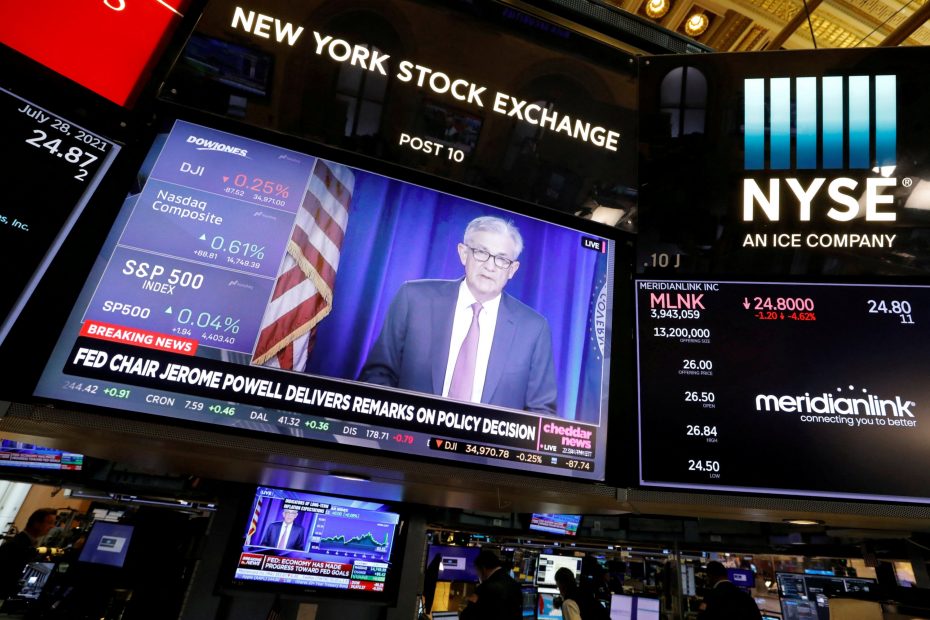 US stocks tumbled after Federal Reserve chair Jay Powell emphasized his resolve to hoist interest rates to curb inflation in a hawkish address on Friday at the annual Jackson Hole central banking summit. Wall Street’s S&P 500 index fell 3.4 percent, while the Nasdaq Composite, which is dominated by technology shares that are more sensitive to interest rate expectations, slid 3.9 percent. It was the biggest one-day decline for both indices since mid-June. Europe’s regional Stoxx 600 share index lost 1.7 percent. Friday’s fall in US equities was broad, with 99 percent of the companies on the S&P 500 down on the day. Every big sector was in the red, with tech and cyclical consumer stocks such as Amazon leading the way lower.

Speaking in Jackson Hole, Wyoming, Powell said the Fed “must keep at it until the job is done”, underscoring the US central bank’s determination to tame rapid price growth. The Fed is fighting the most vigorous surge of consumer price increases in about four decades, with annual inflation clocking in at 8.5 percent in July. But policymakers are also trying to avoid tipping the world’s largest economy into a recession with their program of aggressive rate rises. “[Powell] is pushing against the idea of raising rates and cutting them soon,” said Stewart Robertson, chief economist at Aviva Investors. “I think this is the first sign of Powell saying ‘we will have a nasty period and we need to have it.”

Market pricing on Friday indicated investors were expecting the Fed to raise interest rates to 3.8 percent by February 2023, up from expectations of 3.3 percent at the start of this month. The current target range of the benchmark federal funds rate is 2.25 percent to 2.50 percent. “The implications for the equity market is that previous expectations of a Fed pivot seem premature and hence the short-term direction could be a reversal of the summer rally. Ultimately, these higher interest rates and the further economic slowdown will weigh on corporate profits later this year,” said Janet Mui, head of market analysis at wealth manager Brewin Dolphin. US government bond markets took Powell’s speech in their stride, according to Robertson. The yield on the two-year Treasury note, which closely tracks interest rate expectations, rose 0.01 percentage points to 3.38 percent. The yield on the 10-year note, which is more sensitive to economic growth expectations, was flat at 3.03 percent.

Predictions of tighter policy and higher borrowing costs have already started to weigh on investor sentiment in corporate debt markets. The difference in yield between high-yield US corporate bonds and ultra-low-risk government debt has widened in recent weeks, rising from 4.2 percentage points on August 11 to 4.6 percentage points at the close of trade on Thursday, according to an Ice Data Services index. Junk bond funds recorded $4.8bn in outflows in the week to Wednesday, marking the biggest redemption in nine weeks, according to EPFR data collated by Bank of America. Elsewhere, the European Central Bank is widely expected to raise rates by a half percentage point for the second consecutive time at its next policy meeting on September 8. Some policymakers are pushing for the ECB to consider a more aggressive move to raise rates by 0.75 percentage points because of fears about soaring energy prices that have already driven eurozone inflation to a record level, according to a Reuters report.