Home » Blog » Home prices cooled at a record pace in June, according to housing data firm

Home prices cooled at a record pace in June, according to housing data firm 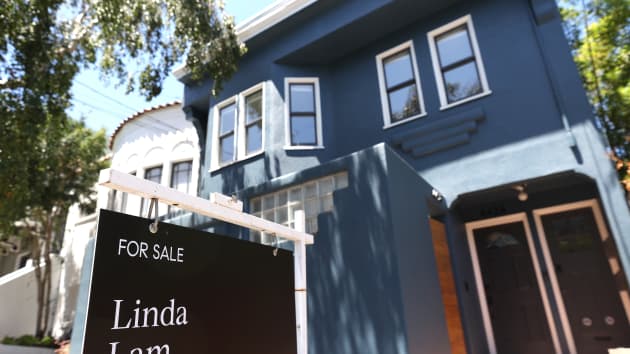 Home price gains are cooling fast, as demand wanes and supply builds.
The annual rate of price appreciation fell two percentage points from
19.3% to 17.3%.
Price gains are still otherwise strong because of an imbalance between
supply and demand. The housing market has had a severe shortage for
years.

Rising mortgage rates and inflation in the wider economy caused
housing demand to drop sharply in June, forcing home prices to cool
down.

Home prices are still higher than they were a year ago, but the gains
slowed at the fastest pace on record in June, according to Black
Knight, a mortgage software, data, and analytics firm that began
tracking this metric in the early 1970s. The annual rate of price
appreciation fell two percentage points from 19.3% to 17.3%.

Price gains are still strong because of an imbalance between supply
and demand. The housing market has had a severe shortage for years.
Strong demand during the coronavirus pandemic exacerbated it.

Even when home prices crashed dramatically during the recession of
2007-09, the strongest single-month slowdown was 1.19 percentage
points. Prices are not expected to fall nationally, given a stronger
overall housing market, but higher mortgage rates are certainly taking
their toll.

The average rate on the 30-year fixed mortgage crossed above 6% in
June, according to Mortgage News Daily. It has since dropped back into
the lower 5% range, but that is still significantly higher than the 3%
range rates were in at the start of this year.

“The slowdown was broad-based among the top 50 markets at the metro
level, with some areas experiencing even more pronounced cooling,”
said Ben Graboske, president of Black Knight Data & Analytics. “In
fact, 25% of major U.S. markets saw growth slow by three percentage
points in June, with four decelerating by four or more points in that
month alone.”

Still, while this was the sharpest cooling on record nationally, the
market would have to see six more months of this kind of deceleration
for price growth to return to long-run averages, according to
Graboske. He calculates that it takes about five months for interest
rate impacts to be fully reflected in home prices.

Markets seeing the sharpest drops are those that previously had the
highest prices in the nation. Average home values in San Jose,
California, have fallen 5.1% in the last two months, the biggest drop
of any of the top markets. That chopped $75,000 off the price.

In Seattle, prices are down 3.8% in the past two months, or a $30,000
reduction. San Francisco, San Diego, and Denver round out the top five
markets with the biggest price reductions.

The cooling in prices coincides with a sharp jump in the supply of
homes for sale, up 22% over the last two months, according to Black
Knight. Inventory is still, however, 54% lower than 2017-19 levels.

“With a national shortage of more than 700,000 listings, it would take
more than a year of such record increases for inventory levels to
fully normalize,” said Graboske.

Price drops will not affect the average homeowner as much as they did
during the Great Recession, because homeowners today have considerably
more equity. Tight underwriting and several years of strong price
appreciation caused home equity levels to hit record highs.

Despite that, the strong demand in the market recently could present a
problem for some. About 10% of mortgaged properties were purchased in
the last year, so price drops could cause some borrowers to edge much
lower in their equity positions.