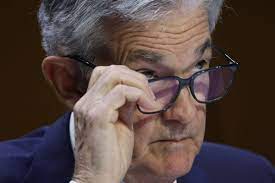 The bond market wants to believe that Federal Reserve boss Jerome
Powell will succeed in getting inflation under control.

It’s unclear just when the economy might witness an actual slowdown in
consumer-price gains, which are presently running at the fastest pace
in four decades.

But as investors brace for the Fed’s next hike on Wednesday,
bond-market measures suggest the traders’ outlook for inflation has
been tempered and is back where it was in February, before the
Russia-Ukraine war turbocharged commodity prices and exacerbated
global supply-chain problems. That’s also encouraged investors to bet
the Fed may end interest-rate increases earlier and at a lower level
than previously thought.

A key gauge of investors’ inflation expectations, known as the
five-year, five-year forward breakeven rate, on Thursday fell to
2.02%, just beneath where it stood on Feb. 18 and the lowest closing
level since early 2021. And while it rose Friday, the rate is well
below the 2.57% mark hit back in April and much closer to the rate of
2% that the US central bank tries to anchor policy around.

“They are really adamant they will take care of inflation and while
there are factors beyond their control, when you take a long look over
5 and 10 years, the market is confident that inflation comes under
control,” said Joe Boyle, fixed-income product manager at Hartford
Funds, which oversees $148 billion in assets.

A big part of the picture is increasing concern that the tightening
the Fed is currently embarking upon might spark an economic slump,
which tends to have a disinflationary impact. The Fed itself says it’s
confident that it can walk the line between battling inflation and
recession, but lackluster stock prices and inverting Treasury-market
yield curves — viewed by many as a harbinger of economic contractions
— suggest investors aren’t convinced by that.

A recent spate of weaker-than-anticipated US economic data has also
added impetus to the recession narrative, which in turn has encouraged
market observers to dial back their view on the pace of Fed
tightening.

The hot consumer-price index print earlier this month spurred some to
forecast a full percentage-point increase in the fed funds rate at
next week’s meeting, following the 75-basis-point move from June. But
that degree of hawkishness proved relatively short-lived. By the end
of this week, a drastic shift down in front-end rates meant that not
only are traders betting on 75 for Wednesday but a move of just 50 is
now seen as more likely for the September meeting.

In the wake of all these moves, traders now see increases to the Fed’s
benchmark topping out somewhere near 3.3% instead of the more than 4%
level that was once implied, while the peak is placed around the end
of this year or the beginning of next rather than being well into
2023.

The most recent pullback in implied hikes did of course help fuel
Friday’s bump back up in market-based inflation expectations, but
all-in-all the Fed is likely pleased that investors are expressing
some confidence that it will ultimately be anchored. Powell has vowed
to keep inflation concern from becoming entrenched in the public mind,
and convincing financial markets is a significant part of that.

Just how concerned the Fed is about perceptions, as well as actual
price increases, was evident at the last meeting when Powell drew
attention to the widely watched indicator of consumer expectations
that forms part of the University of Michigan’s data releases. A shock
jump in a preliminary reading from their survey appears to have helped
push Fed officials abruptly toward a bigger rate increase in June than
was previously in the cards. Ultimately, the final reading on the
gauge came in lower than that and the latest data from July indicated
an easing, providing evidence that the Fed may in fact be winning the
battle for the public mind.

Meanwhile, the most recent auction of 10-year Treasuries that are
indexed to the consumer price gauge drew the lowest bid-to-cover ratio
since July 2017, a potential signal that demand for inflation hedging
is waning.

It’s also not just longer-term expectations where the Fed is gaining
traction, but the shorter-end of the curve too. The two-year breakeven
rate on Treasury Inflation-Protected Securities has pulled back from
more than 4.9% in March to around 3.1%.

Gang Hu, the managing partner at Winshore Capital Partners, says that
based on his calculations inflation swaps are showing that investors
expect the monthly increase in the core consumer-price index will
return to its pre-pandemic trend of around 0.2% by November. That
would be a dramatic pullback from the high of 0.7% reached in June.

Not everyone is convinced that inflation is in check. Mike Sewell, a
portfolio manager at T. Rowe Price, reckons that the market is being
too complacent.

Indeed, it has proved to be the case in the past. Market participants
— and officials — have suggested on a number of occasions in recent
months that inflation was at or near a peak, but price pressures have
shown themselves to be broad-based and persistent.

One key measure to watch will be the personal consumption expenditure
gauge that the Fed itself pays close attention to. That’s due out
toward the end of next week as part of the personal income and
spending report.

“The bond market is hoping for a magical disinflation to help out the
Fed,” Sewell said.

For bond bulls, what’s different now is that the economy is showing
more signs of deteriorating. Jobless claims are ticking up, consumer
confidence is tanking and the red-hot housing market is cooling off.

The coming week will also see the government provide its first reading
on second-quarter gross domestic product. After actually shrinking
quarter-on-quarter in the first three months of 2022, the economy is
currently expected to have eked out a small expansion in the
April-June period, although nothing particularly robust. The report,
which comes a day after the Fed decision, is likely to show annualized
quarter-on-quarter growth of 0.4%, according to the median estimate in
a Bloomberg survey.

To top if off, the price pressure from supply shortages is showing
some signs of easing. Commodity prices are leveling off, while a New
York Fed gauge of global supply chain pressure fell in June to the
lowest since March 2021.

“The market is expecting that this might be peak inflation with
concerns now on recession,” said Barbara Ann Bernard, founder of hedge
fund Wincrest Capital.