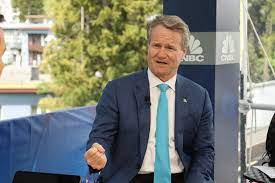 Bank of America’s account holders saw strong growth in their balances
during Covid and have yet to spend down their pandemic-era stimulus
money, CEO Brian Moynihan told CNBC.

The government provided Covid relief funds throughout 2020 and 2021 to
help blunt the economic effects of the pandemic including
unemployment, shuttered businesses, and more. But most of those
programs have since been rolled back.

At the same time, soaring inflation and its decimating effect on the
stock market have raised questions about whether Americans’ savings
accumulated during the height of the pandemic is still intact, and if
they’re still spending healthily.

Moynihan previously said in an interview on “Mad Money” in April that
consumers spent 13% more this past March than they did the same month
last year.

Yet, this increased spending doesn’t seem to have made a dent in
consumers’ balances.

“In the balances of our customers, they have more money. In April,
their balances grew over March, and in March they grew over all the
way back to mid-last year,” Moynihan said Monday from Davos.